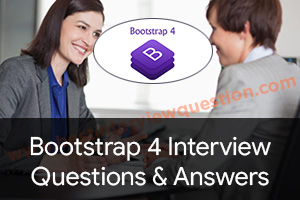 Here in this article, we will be listing frequently asked Bootstrap 4 Interview Questions and Answers with the belief that they will be helpful for you to gain higher marks. Also, to let you know that this article has been written under the guidance of industry professionals and covered all the current competencies.

Bootstrap 4 is the current version of Bootstrap. Bootstrap 4 is basically an HTML, JavaScript and CSS framework. Bootstrap 4 is popular among the developer across the globe for building mobile-first and also responsive sites with a Bootstrap content distribution network and the template starter page. Bootstrap 4 is free to download and use.

suggest an answer 1 Answer
36 1
2. Bootstrap 4 released on which date?

This is a primary bootstrap 4 interview question.

suggest an answer 1 Answer
12 3
5. Can you explain the basic Structure of a Bootstrap 4 Grid?

The Bootstrap 4 grid System is developed with flexbox has a limit of 12 columns across the entire page. If a developer does not want to use the 12 columns individually then, it can be merged to create a full column. The grid system in Bootstrap 4 is responsive and also depending upon the screen size the columns are re-arranged dynamically. The UI developer has to make sure that the sum must be 12 or less than 12.

The bootstrap 4 grid system has the following five classes:-

The above classes can be united to create a flexible and dynamic layout.

Bootstrap 4 is a significant change from its earlier versions. Following are some of the necessary changes:

Point to be noted: Go through this Q&A very thoroughly as this is one of the essential bootstrap 4 interview questions.

Bootstrap has the following image shapes and Corners:-

The class .rounded add round corners to the image .

The class .rounded-circle turns the shape of the image to a circle.

The class .img-thumbnail turns the shape of the image to a thumbnail, i.e. bordered image.

The classes .mx-auto (margin:auto) & .d-block (display:block) align the image at the center.

A Bootstrap 4 table has very light padding and has a horizontal divider. The class .table gives primary styling to a table.

1 .table-primary—it is blue in color, and it shows a significant action.

2 .table-success-it is green in color, and it shows a successful or a positive action

3 .table-warning -it is orange in color and it shows a warning and needs attention.

This is one of the most asked Bootstrap 4 interview questions.

There are three positions in Bootstrap 4:-

There are two types of Bootstrap 4 colors:-

Bootstrap 4 has few contextual classes which can be used to give "meaning through colours". The classes for the text colours are: .text-muted, .text-success, .text-info, .text-primary, .text-danger, .text-secondary, .text-dark, .text-white, .text-body (default body colour/often black) and .text-light. Contextual classes can be used on links, and this will add a darker hover color. 50% opacity for black or white text can be added with the classes .text-black-50 or .text-white-50.

To make sure sufficient spacing is given used padding and other tags as needed. We can have more than one media objects nested with each other. You can add another .media class in a container with a class of .media-body. Alignment to the right can be done by adding an image after .media-body container. For Bottom, top or middle alignment we can provide utilities of flex such as align-self*

Please enter your details to download Bootstrap 4 Interview Questions PDF
Click here to subscribe our email newsletter to receive updates on the interview questions and blogs.
Hey, care to share your feedback?
Visit our blog