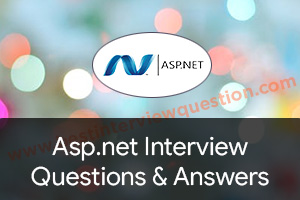 As a new age web development platform, ASP.NET includes a programming model, a software infrastructure and a vast number of services required to create web-based applications for both desktops as well as mobile devices. This framework also allows programmers to build dynamic websites and web services. It operates on top of the HTTP protocol and utilizes commands and policies of HTTP to set browser-to-sever bilateral cooperation and communication. The application codes for ASP.NET can be written in any of the following languages, which are C#, JScript, j# and Visual Basic.Net.

You will get the insight of ASP.NET through asp.net interview questions professionals as well as for freshers.

The prime difference between these two is that ASP is interpreted platform as scripts are being used, whereas ASP.NET is a compiled platform because of its pages using .NET languages. All the ASP.NET pages are MSIL (Microsoft Intermediate Language) compiled.

Internet Information Server or IIS is developed by Microsoft with its own operating system. It is used to execute web page scripts. It works in between ASP.NET engine and browser to process chrome requests and responses are submitted back.

An ASP.NET page goes through a series of stages in the life cycle as following,

Both ASP.NET Web Forms and MVC are tolls with different strengths and workability. Web Forms are used to create web apps with ASP.NET and utilize designer and server controls to design a form with a point and click interface, whereas VMS is used to separate as web app into data, actions and display.

There are five primary session state modes present in ASP.NET.

suggest an answer 0 Answer
0 0
Q. 6.What’s the difference between Response .Redirect and Server.Transfer?

Server.Transfer sends information from one web request to another on the server side, But, Response.Redirect sends an HTTP 302 message to the browser and implements a redirect in the browser.

Here are the few most used ASP.NET validators by developers:

suggest an answer 0 Answer
0 0
Q. 8.What is an ASP.NET validator? And, mention its types.

An ASP.NET validator controls validate the user input data. Whenever the user shares an input, it must validate them before sending it across various layers of the application.

There are two types of validation used in ASP.NET:

It is used to retain the state of the server-side objects between page postbacks. After the page postback, it is stored in a hidden field on the page at the client side. It is transported to both client and server side, and not stored on the server or any other external source.

The caching technique is used to increase performance level in ASP.NET by keeping frequently accesses files or data in memory. The request for a cached data/file will be directly obtained from the cache instead of the actual location of that data or file.

ASP.NET has three types of caching:

suggest an answer 0 Answer
0 0
Q. 11.Explain the use of fragment caching.

Fragment caching is used to cache a portion of a target page instead of the whole page. The target portion can be generated by request. For this, developers can create a control with the below syntax:

suggest an answer 0 Answer
0 0
Q. 12.What is syntax code to send email from an ASP.NET application?

Developers use the following syntax code to send email from an ASP.NET application:

suggest an answer 0 Answer
0 0
Q. 13.Explain the difference between the web config and machine config.

This process is used to implement security based on roles assigned to different user groups in an organization. We can allow or deny permissions to users based on their organizational role.

suggest an answer 0 Answer
0 0
Q. 15.Is it possible to apply themes to an ASP.NET application?

Yes, it is possible to apply themes to an ASP.NET application. Developers can specify them in the web.config file with following syntax:

SQL invalidation directly invalidates the data present in the cache when a change is applied in the database that is copied to cache earlier. Compared to this, SQL notification triggers only when there is a change in the data that is made a copy in the cache.

The platform was first released in 2002 by Microsoft with a version 1.0 of the .NET framework as a successor of Microsoft’s ASP (Active Server Pages) technology. It can operate on Microsoft Windows, macOS and Linux.

With its language independence and countless other user benefiting features, ASP.NET is a popular platform for businesses, creating a massive demand for skilled individuals in this niche, Here in below; we are mentioning a set of top ASP.NET interview questions and answers prepared by experts for interview aspirants.