Appium is an open-source tool for automating Quality Testing on native, mobile web, and cross-platform applications for iOS mobile, Android mobile, and Windows desktop platforms. More importantly, Appium is "cross-platform" which allows you to write Quality functioning tests against multiple platforms (iOS, Android, Windows) while using the same API. This enables code reuse between multiple platforms like iOS, Android, and Windows testsuites. Below is a list of the most commonly asked Appium Interview Questions. Have a read online or download in PDF format to read later on.

1. What is Appium mobile testing?

suggest an answer 0 Answer
0 0
2. What are the types of mobile testing?

There are 10 different types of functional/unit testing. They are:

suggest an answer 0 Answer
0 0
3. What is Appium architecture?

Appium is written in Node.js which is basically a client-server architecture served as an HTTP server built to create and handle multiple WebDriver sessions. This testing tool starts as a “ Test Case” on the device which then spawns a server and listens to any proxy commands from the main server of Appium. 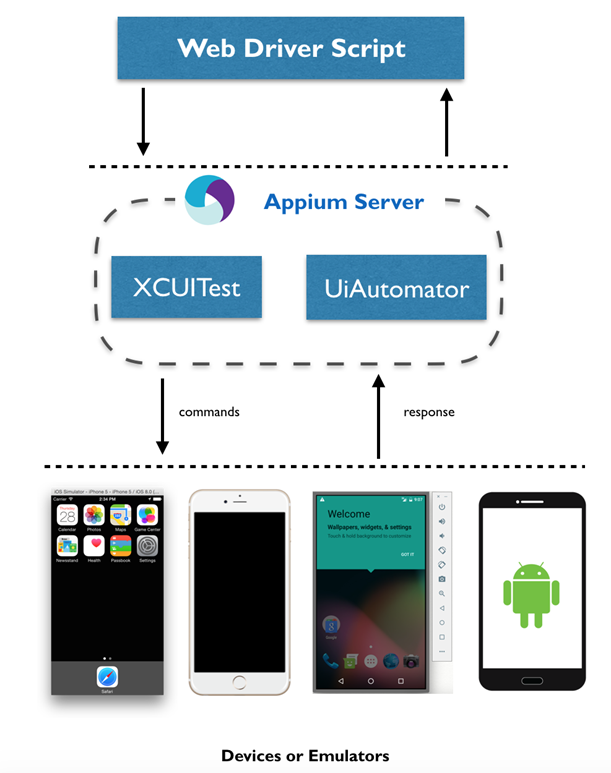 Once the Appium server receives a connection with details from the client in the form of a JSON object over HTTP, it creates a session as specified in JSON, and then returns the session ID, which is to be maintained until the main Appium server is running. Thus, all the quality testing will be performed in this newly created session. Following is a diagram depicting the Appium architecture clearly:

suggest an answer 0 Answer
0 0
4. What are the challenges in mobile device testing?

Challenges faced while Quality Testing may vary from application to application, but, these 8 challenges are the most common obstacles faced:

suggest an answer 0 Answer
0 0
5. What are the prerequisites for Appium?

The following are the basic prerequisites for running Appium.

suggest an answer 0 Answer
0 0
6. What are the system requirements for Appium?

Below is a list of System Requirements for running Appium

suggest an answer 0 Answer
0 0
7. What is the most difficult scenario to test with Appium?

The most difficult scenario to test on Appium is an environment with data exchange as it requires testing of varied modules with different device testing, making the process very complex

suggest an answer 0 Answer
0 0
8. What are desired capabilities in Appium?

In Appium, Desired Capabilities are a set of keys and values sent to the main Appium Server to relay as to what kind of automation should be started. There are various capabilities that are used to modify the behavior of the server accordingly during the automation process.

suggest an answer 0 Answer
0 0
9. What is UDID and how do you find UDID in Appium?

UDID stands for Unique Device Identifier. It is required during the process of Android application development or also during Android App automation to get a unique ID of a specific Android device.

suggest an answer 0 Answer
0 0
10. What is UiAutomator in Appium?

In Appium, UI Automator is a User Interface testing framework best suited for cross-app functional UI testing across systems and other installed apps. The UI Automator APIs allow you to perform various operations such as opening the Settings menu or also opening the app launcher in a test device.